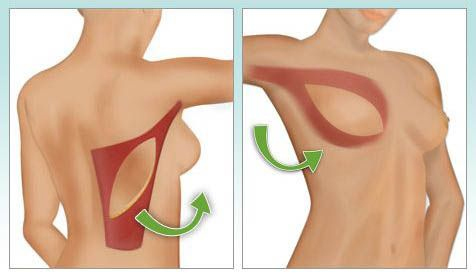 The latissimus dorsi (LD) flap is a standard procedure for breast reduction and was first used in the 1970s. The latissimus dorsi flap is usually combined with a tissue expander or implant, to allow Dr. Seify more options and increased control over the aesthetic appearance of the breast once it is reconstructed. The flap allows for a source of soft tissue that can allow for creation of a more natural looking breast shape when compared to an implant alone. In some cases, a thin patient with very little breast volume, can benefit from the latissimus dorsi i flap procedure alone as the main source of breast reconstruction without the necessity of an implant. Dr. Seify may resort to the use of an latissimus dorsi flap as an alternative option when the patient has wound healing problems or is experiencing soft tissue failure during the settling of an implant.

The latissimus dorsi flap can also be utilized as a viable option for patients who have experienced previous radiation, and are not suitable candidates for other autogeneous procedures. A large open wound existing on the chest wall can also be an indication for an LD flap for patients who so we need chest wall reconstruction, and do not need creation of a breast shape. The thoracodorsal artery is the main source of blood supply to the latissimus dorsi flap. During the breast reconstruction procedure, Dr. Seify takes the muscle flap, either with or without attached skin, and lift it off of the back and pulling it forward and around to the front of the chest wall. The main vessels remain attached in order to preserve blood supply to the flap. The LD flap allows for soft tissue to completely cover the underlying implant. The latissimus dorsi flap breast reconstruction is typically performed by Dr. Seify in 2 to 3 hours and requires one to three days postoperatively in the hospital. The initial recovery period is 1 to 3 weeks.

Scarring berries from patient to patient; however, the scar from the LD flap donor area on the back is typically placed either diagonally or horizontally. When placed horizontally it can typically be concealed under a bra strap. In general patients have no major limitations long-term physically following surgery as a result of taking the latissimus muscle. Daily living activities and most exercise routines can be resumed without a significant loss of ability. Secondary procedures following an latissimus dorsi flap reconstruction can be performed after approximately 3 months. These could include an exchange of the tissue expander, and adjustment to procedures designed for improving breast symmetry, and nipple areola reconstruction. Just as with any type of reconstruction procedure, if chemotherapy is required, additional surgeries must be postponed until the completion of treatment. Most additional procedures are usually done on an outpatient basis and are associated with quick recovery times. Ideal candidate for latissimus dorsi flap reconstruction include but are not limited to:

Patients are not an ideal candidate for LD flap reconstruction if they: